The Indian government is developing a Buddha Park on 285 acres of land in Nagarjuna Sagar. In July 2004 on one side of their project on the edge of the hill they allocated 35 acres of land for the development of a Vipassana center. Goenkaji has named this centre Dhamma Nāgājjuna after the great scholar Acharya Nagarjuna who was the chief abbot of Nalanda University. The centre enjoys a beautiful view of the reservoir and the surrounding hills. Dhamma Nāgājjuna is 160 kms from Hyderabad. From Hyderabad one can go by car (2.5 hour journey) or bus (3.5 hour journey). 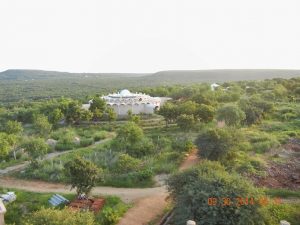 Now in its second decade Dhamma Nāgājjuna has been evolving to meet the growing demand of students who want to attend courses. The completion of Kitchen, Dining Hall and Pagoda is a major accomplishment. These 3 projects have costed the center around 1.5 crores. Huge plantation has taken place in the first decade and now the trees stand tall having grown enough to give the barren land a vibrant lush-green look. Trees of Neem, Lemon, Amla, Mango and Kanuga trees occupy the garden. The garden is producing enough lemon and amla for the students.